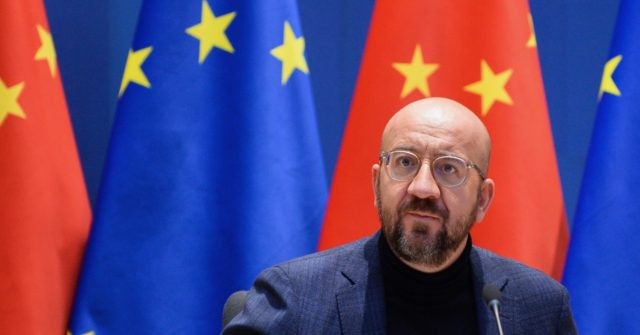 The European Union will not require the Chinese Communist Party (CCP) to ban the use of forced labour before ratifying the proposed €120 billion investment pact with the authoritarian regime, France’s junior minister for trade said on Tuesday.

The deal was brokered hastily before the start of the incoming Biden administration in the United States and has been characterised by the European Commission as “most ambitious agreement that China has ever concluded with a third country”.

The European Union has drawn considerable backlash over the deal, with many pointing to the failure to secure meaningful concessions from the communist regime on issues of human rights, as the deal merely states that China will “work towards” the implementation of International Labour Organization conventions which would prohibit slave labour.

In an interview with POLITICO on Tuesday, Franck Riester, France’s junior minister for trade, said that the EU will not seek to gain concessions on slave labour before signing the massive trade deal.

“We will sign, the European Union will sign [the investment agreement] with the provision noted in the text, which is to make sustained and continuous efforts for ratification” on labour standards.

“We have an agreement that says that it’s a commitment to ratify — not to ratify at the time of signature — but to ratify,” he said.

Mr Riester said that the deal with China differs from the deal signed between the bloc and Vietnam last year, which was only ratified by the EU Parliament after Vietnam introduced labour codes preventing the use of slave labour. He said that the European Union will only ask Beijing to commit to a “calendar” to implement worker’s rights.

In response to the failure to implement strict requirements on labour rights, French MEP Raphaël Glucksmann said: “As a Member of the European Parliament, I am sad to tell that the EU is the one taking the wrong path.”

Glucksmann went on to say that the “UK, followed by Canada, shows more dignity on this than all member states and EU combined. The way we act in face of a crime against humanity defines our role in History.”

In comments made to Breitbart London following the announcement of the EU-China trade deal, Hong Kong Watch founder and chairman Benedict Rogers said that the investment pact is a “real setback for the free world“.

“It’s a travesty, a betrayal of the EU’s values, and a threat to the security of European member states,” Rogers added.

Brexit leader Nigel Farage also condemned the deal, saying: “Brussels greed is helping the regime to take over the world.”

On Tuesday, Foreign Secretary Dominic Raab announced the British government would be imposing fines on firms who use Xinjiang slave labour their supply chains.

Writing in The Telegraph on Wednesday, Secretary of State for International Trade Liz Truss said that the goal of implementing fines “is to make sure that no company that profits from forced labour in Xinjiang can do business in the UK, and that no UK business is involved in their supply chains.”

“We want a positive and constructive relationship with China. But we will not sacrifice our values in doing so,” Trus added.

Critics of the Chinese Communist Party within the Conservative Party have pushed the government to introduce harsher measures, however, with many hardliners, including former party leader Sir Iain Duncan Smith calling for the introductions of Magnistky sanctions on Chinese officials involved with the mass internment of Uyghurs in Xinjiang.